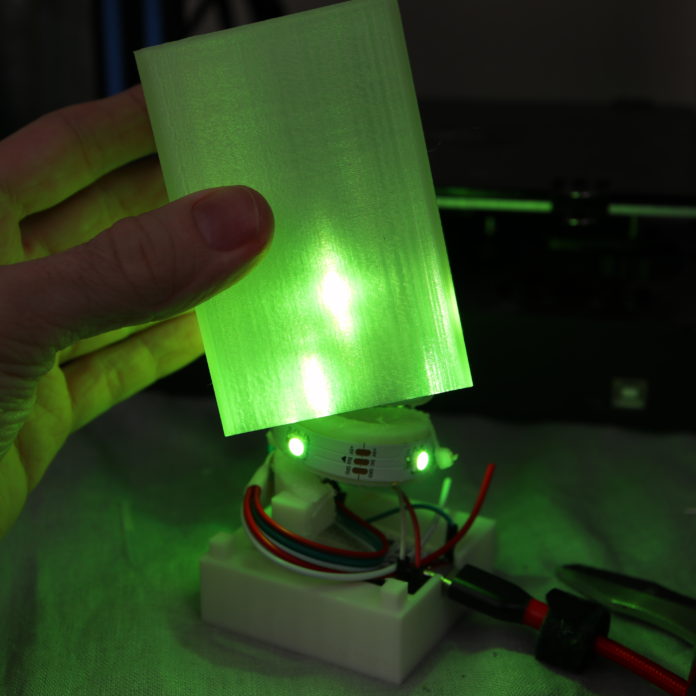 Recently, I got my hands on a SEEED XIAO BLE microcontroller. The first thing that caught my attention was the super small size of the microcontroller. It’s about half the size of an Arduino Nano that I have used in many of my previous tutorials/projects. In order to get familiar with the XIAO BLE, I started an easy project that is the topic of this tutorial. I decided to make a 3D-printed “RGB lamp”, i.e. a lamp that changes its color from time to time.

The SEEED XIAO BLE (Documentation | Product Page) is part of SEEED’s XIAO microcontroller family. The XIAL BLE comes with a Bluetooth 5.0 module which makes the microcontroller a perfect fit for wireless IoT applications. There exists also a more advanced version called XIA BLE Sense which comes with a microphone and an inertial measurement unit (IMU). In this tutorial, I just use the basic version “XIAO BLE”.

If you “originate” from the Arduino ecosystem, you can still use your Arduino IDE and many libraries to program the XIAO BLE. But be careful, some libraries won’t work on the XIA BLE since it uses a Nordic nRF52840 CPU. The Arduino microcontrollers normally come with a CPU of the ATmega family (e.g. Arduino Uno has an ATmega328 CPU). Sometimes, libraries only provide implementations for ATmega CPUs.

First, the tutorial shows how to wire an WS2812B LED strip to an XIAO BLE. Then, the programming of the LED strip is explained. Finally, a 3D-printed lamp is presented where the XIA BLE can be inserted and the LED strip can be attached.

The WS2812B requires a 5V power source. Although the XIA BLE is a 3.3V-based microcontroller, it can provide 5V on its 5V pin when powered by USB cable. Since we want to use a USB cable to power our RGB lamp, we can use the 5V pin to power the WS2812B LED strip.

Normally, I use the FastLED library when I want to control an WS2812B LED strip. As I mentioned before, the XIAO BLE comes with an nRF52840 CPU. When I tried to use the FastLED library, I got some issues. For me it looks like that the nRF52840 CPU is not well supported yet. Normally, I really dig into the problem and try to find the root cause. But this time, I was eager to try out Adafruit’s NeoPixel library, which I’ve never used so far. Therefore, I can not tell for sure whether FastLED does work or does not work with XIAO BLE. Fortunately, NeoPixel worked right from the start.

The example program is very simple. First, I initialize a NeoPixel object in order to control the LED strip. In the loop function, a variable “current_hue” is incremented. The idea is that with each loop call, the color (hue) changes. As a result, the LED strip will shine in all possible colors (always with same brightness and saturation but different hue). After a lot of loop calls, there will be an “integer overflow”. Luckily, this won’t be a problem since then “current_hue” is then set to zero and the first hue is shown again.

I designed a very basic 3D-printed lamp for this tutorial. The lamp has two parts.

The first part is used to insert the XIAO BLE. It will fit perfectly into the lamp if one of these common mini breadboards are used.

Then, use some cable ties to attach the LED strip to the shape.

For my prints I used white PLA filament (first part) and transparent PLA filament (second part). Both parts were printed on a Geeetech A10 3D printer. If you are interested in the model, you can download both here:

So, I hope you enjoyed this little tutorial on how to use the XIAO BLE. Overall, I like working with the XIAO BLE a lot. Especially if you have only limited space for your microcontroller, the XIAO BLE is an excellent choice.

Unfortunately, there might be some compatibility issues with some libraries that were originally made for the Arduino. At least until now, I always found alternative libraries or other workarounds.