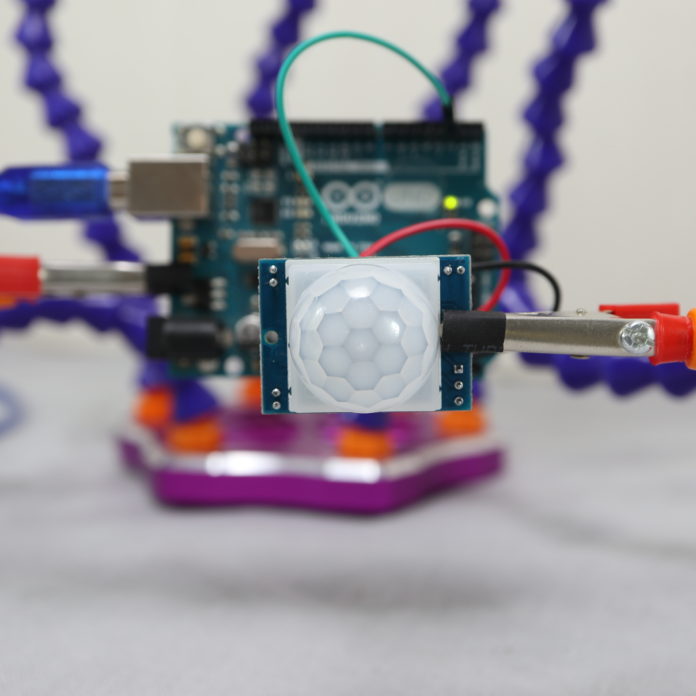 Passive infrared (PIR) sensors measure infrared (IR) light emitted from objects that are in their field of view. PIR sensors enable to detect movement by change in IR light. They are considered as “passive”, since PIR sensors do not actively emit any IR light. Typically, PIR sensors are used for automatic house lighting installations (indoor and outdoor) or security installations.

The HC-SR501 PIR sensor comes as breakout board with the PIR sensor on top. The PIR sensor has a “fresnel lens”-shaped cover to protect the sensor and to have a sensing angle of about 110°.

The operating voltage ranges from 5V to 20V DC. Moreover, the PCB has two holes to mount the breakout board to any type of installation (e.g. into a 3D-printed housing).

The idea of the example application is to wire the HC-SR501 PIR sensor to an Arduino. The Arduino Uno reads the output signal of the PIR sensor. The Arduino Uno prints the information whether movement has been detected or not to the serial monitor. In addition, the Arduino’s in-built LED is switched on, if movement is detected.

Once you have the example application running, you can play around with the adjustment options of the HC-SR501 to find the perfect settings for your application.

Wiring between Arduino Uno and HC-SR501

In the setup function, the serial connection is started. Moreover, the pin mode of digital pin 2 is set to “input”. The Arduino’s in-built LED is on pin 13, which is set to output mode.

After transferring the program to an Arduino Uno, the in-built LED should light up as soon as you start to move in front of the sensor. In case the LED does not light up, try to adjust your sensor settings by turning the potentiometers.

In addition to the LED, a message about the detection should also appear on the serial monitor.