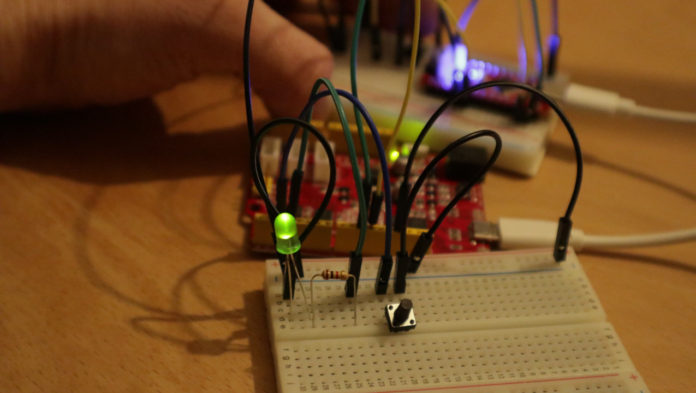 This tutorial shows how to establish a serial connection connection from an Arduino to another Arduino. Each Arduino has a tact switch and an LED. If an Arduino’s tactile switch is pressed, the LED of the other Arduino will be turned on.

First, the pins for the tact switch (INPUT_PULLUP) and LED (OUTPUT) are set up. Then, the serial connection is started. In the loop function, it is checked whether a byte was received from the serial connection. The digital output is set to the received byte: Either ‘0’/false to turn off the LED or ‘1’/true to turn it on. Next, the current status of the tact switch is sent. ‘0’ is sent to the other Arduino, if the tact switch if not pressed. Otherwise, ‘1’ is sent. At the end of the loop function, a delay of 250ms is added.

The source code has to be transferred to both Arduinos (= both Arduinos have the same very same code). If everything has been executed correctly, an Arduino’s LED is switched on, if the tact switch of the other Arduino has been pressed.