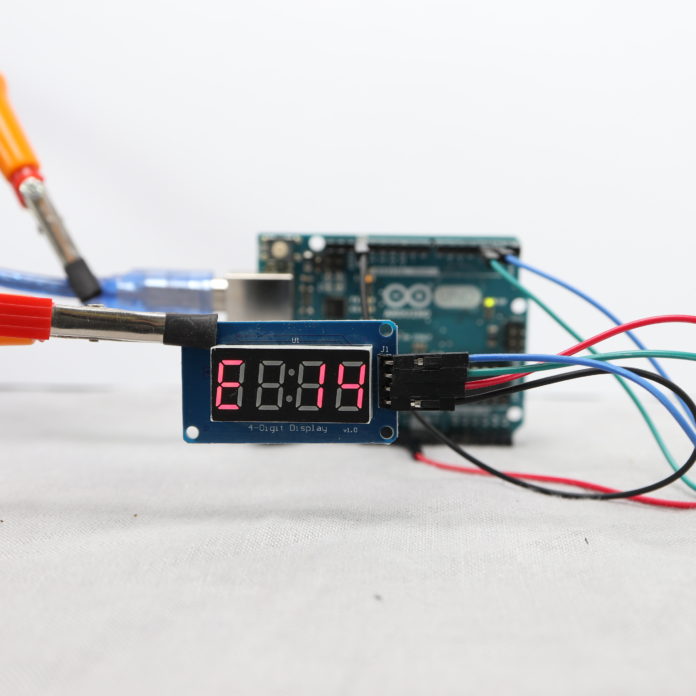 The Catalex 4-Digit Display is a module that enables to show up to four digits on an integrated 7-segment display. The module can be used for many applications, such as stopwatches, clocks or for simply displaying some debugging information.

There exist many similar modules that have the same functionality as the Catalex module. All of these modules have in common that they have a TM1637 chip. The TM1637 chip is a generic drive control unit for LED-based segment displays that can be controlled via a two-wire serial interface. TM1637-based modules are very popular within the maker community, since they are cheap and very easy to use.

This tutorial shows how to use the 4-Digit Display with an Arduino Uno.

The module contains only two components (besides some resistors and capacitors): a TM1637 chip and a display that shows up to 4 digits and a colon symbol.

The module has four pins which are described in the following table:

Due to the simplicity of the module, only four connections have to be wired to the Arduino.

In this tutorial, we make use of the Arduino’s pin 2 and 3 to wire to the CLK and DIO pin of the module. The following table shows all connections:

In this tutorial, a very simple application is programmed:

Before you start with programming, you need to install the TM1637 library. If you use the official Arduino IDE, you find the library in the Library Manager. This tutorial shows only a subset of the library’s capabilities. Have a look at their website to discover more in the official documentation.

At the beginning of the code, an object of type TM1637Display is created which represents the display module. The constructor has two arguments (CLK pin and DIO pin). In the setup function, the display is cleared and the brightness is set to the maximum level (7).

In the loop function, the method “showNumberDec” is called 10 times with the help of a for-loop. As a result, a counting from 0 to 10 is shown on the display. The method is called with only one argument which is the number to be shown.

Again, the display is cleared for the final phase. As in the second phase, a loop function is utilized. This time, two methods are called:

As a final step, the display is cleared (and then the routine starts again).

If you transfer the program to the Arduino Uno, you should see the different numbers on the display.

In summary, TM1637-based modules are very helpful if you have the right applications for it. Moreover, these modules are also very useful if you want to learn some advanced techniques. It is also possible to control each segment of the display by setting bitmasks (not shown in this tutorial).