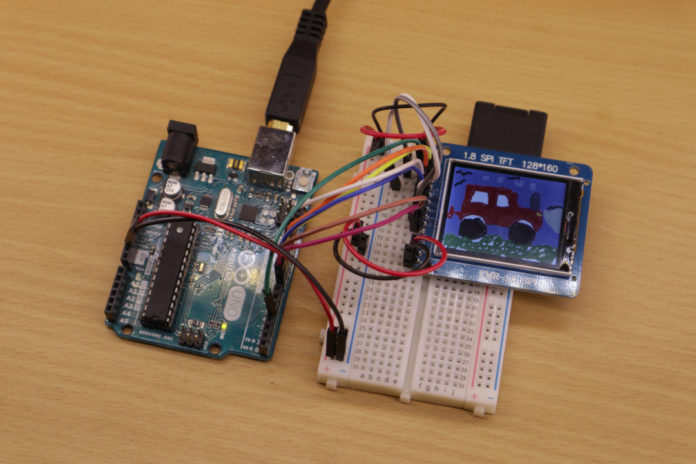 Recently, I had the idea to make a digital picture frame—one of these kinds which load images from SD cards and show each image for some time. I was remembering myself that I already own a small TFT display, the KMR-1.8 SPI, that works out of the box with an Arduino Uno. When I digged up my KMR-1.8 SPI, I realized that it has also an in-built SD card reader. Moreover, I looked up the Internet and found ready-to-use libraries for the in-built SD card reader as well as showing images on the TFT display. For these reasons, I thought making such an digital picture frame will turn out very easy.

When I started to implement my first lines of codes and started to connect my Arduino Uno to the KMR-1.8 SPI, I ran into two major problems. First, the colors of my image file did not match to the colors displayed by the KMR-1.8 (red and blue were interchanged). Second, my first prototypes stopped to work after about 5 minutes. The application started to freeze and showed the same image forever instead of displaying the next image after a chosen time.

I did some research on the Internet and I found out that many people ran into similar problems. The second problem seemed to be caused by some memory leaks in the code. Nevertheless, I did not came across any example code that worked out of the box for my setup. Therefore, I want to share how I made it work.

There exists various versions of so-called “1.8 TFT displays” from different manufacturers. Not all of them are 100% compatible to each other. Therefore, if you own a TFT display and want to use my tutorial to make it work, please check if your TFT display really matches the version I used in this tutorial:

To make it work, you have to connect many wires between the Arduino and the TFT display. I created a fritzing file that shows all the wiring:

The wiring is more or less straight forward. Keep in mind that the Arduino’s 5V pin goes to the VCC pin as well as to the LED+ pin. The same applies to the Arduino’s GND pin which goes to GND and LED- of the TFT display. Arduino’s digital pin #13 goes also to two pins (SCK and SCL). Next, there is a picture of my setup with completed wiring:

Source code:
The source code relies on three header files (and libraries): SPI.h (Link), SD.h (Link) and TFT.h (Link). Please make sure that all of them are correctly installed before trying out my source code (In Arduino IDE: Tools -> Manage Libraries…).

In the introduction of this blog post, I mentioned that I came across two major problems: the colors red and blue were interchanged and my early Arduino programs started to freeze after some time. Luckily, I was able to fix all issues. The following source code works perfect on my setup. My “digital picture frame” does not require to be restarted after some time (my long-term test lasted about two weeks—and no restart was necessary).

I overcame the first problem by not using the default initialization method (“TFTscreen.begin();”) of the TFT library. Instead, I looked up whats inside the “begin”-method. I found a method called “initR” which has a parameter that allows to perform the initialization for a specific chip. Here, the parameter value “INITR_BLACKTAB” worked for me as the colors were then shown correctly. In addition, I call the method “setRotation” with parameter value “1” in order to be conform to the default initialization method. In the end, the code for the setting up the TFT library object looks like this:

I solved the second problem (application freezes after some time) by avoiding any possible memory leak, i.e. to “free” every bit of memory that was reserved before as soon as it is not needed anymore. Therefore, you will find a lot of “close”-method calls as well as some weird string handling. When I wrote the code, I thought I could simplify a few things. However, the memory leak problems came back. So, the code might look weird but it works :)

Here is the full source code:

The code looks for image files (*.BMP) on the SD card and shows each image for 60 seconds. You can change the display time by setting “DELAY_IMAGE_SWAP” to a new value.

Important Note: The image files on the SD card must be stored as BMP with a resolution of 160x128 pixels (width x height). Moreover, long file names and special characters must be avoided.

If everything was done correctly, your Arduino-based “digital picture frame” should show the pictures in all their glory. Here is an example picture (tractor-like vehicle that I drew together with my son):