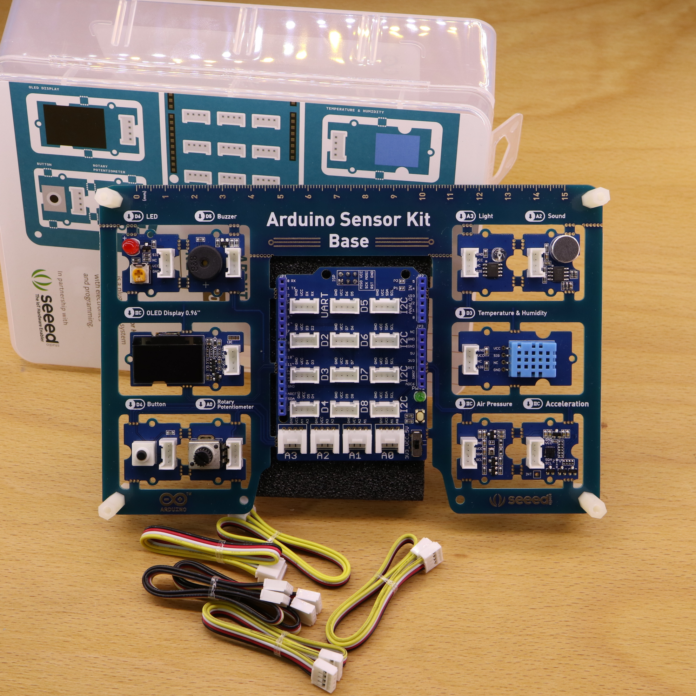 Recently, Seeed Studio published a new “starter kit”, the so-called Arduino Sensor Kit. In this article, I want to give a short overview to the new kit. Moreover, I want to compare it to the Grove Beginner Kit that I reviewed a few month ago, since both kits look very much alike. I will check whether my example project from the last article does also work for the Arduino Sensor Kit. Finally, I want to elaborate on whether it can also be used with an ESP32 instead of an Arduino. This would be beneficial e.g. for beginners, who plan to start with an Arduino but then would like to go on with an ESP32. For example to work on wireless applications.

The Arduino Sensor Kit is a large printed circuit board (PCB) that comes with 10 integrated (sensor) modules. The idea is to mount the board on top of an Arduino Uno (not included). In addition to the modules, the board has an integrated ‘Grove Base Shield’. The Arduino becomes then compatible to the Grove ecosystem.

Similar to the Grove Beginner Kit, the Arduino Sensor Kit addresses people that are looking for an easy start into the Arduino ecosystem—without putting a lot of effort into wiring modules. Due to the cooperation with Arduino (arduino.cc), you find a full tutorial on their website.

With the changes made for the pin definitions, the example does also run on the Arduino Sensor Kit.

Next, we have a look at the differences between Arduino Sensor Kit and Grove Beginner Kit. Here is the most obvious one:

Fun fact, exactly the pins that I used in my Light Intensity Example have been changed. The other modules have the same pins for both Kits. Besides that, there are only minor changes. Seeed published a document that shows the changes in more detail (Link). In general, the change of the pins is not a big issue. I guess, the normal customer decides on either the Arduino- or Grove variant and won’t buy both boards. Moreover, except for the pin changes, the boards are very compatible to each other.

Is the Arduino Sensor Kit also usable for ESP32?

The Arduino is around for almost 10 years by now — and still a very popular platform to get started with electronics. Within the last years, also the ESP8266 and ESP32 got a lot of attention. My impression is that a lot of people start also with ESP8266/ESP32-based microcontroller, e.g. when they are looking for wireless applications right from the start.

I asked myself, what if you are looking for a good starter kit, e.g. for the Arduino Uno that you want to re-use for the ESP32. So I took my ESP32 DEVKIT (V1) and started to try it out. As

Please note, the re-use for ESP32 requires some wiring. So the initial idea of “no wiring required” can’t be adapted to the ESP32 use case.

First, we have to make sure that the pins of the Arduino Sensor Kit do not take any damage. This can be done by using the piece of foam that was already included (for packaging reasons). Then, we have to connect, the ESP32 to the Arduino Sensor Kit. Btw. when I do wiring work with an ESP32, I use two breadboards as a single breadboard is not wide enough for the ESP32:

Unfortunately, we cannot use the same pins in the Arduino programming when running on an ESP32, since the ESP32 has a different pin layout (and numbering). For the wiring, just wire the ESP32 pins to the upper (female) pins of the Grove Base Shield. The following table shows the wiring changes:

Then, I switched the little switch of the Grive Base Shield from 5V to 3.3V (bottom right corner).

The new pin layout results in some code changes. Moreover, there is another code change. The analog values of an ESP32, result in a value between 0 and 4095 — instead of 0 and 1023 (Arduino Uno). Therefore, the parameter of the map function has to be changed ( at the beginning of the loop function). Btw. I changed the data types of two variables from int to unsigned. It is not crucial. However, I thought it is the “better” choice since the variables must not become negative (results in an endless delay at the end). So, here is the updated code:

If you performed all steps correctly, also the ESP32 should be able to run the program on the Arduino Sensor Kit. Due to the use of 3.3V, the buzzer is not as loud as before. Besides that, everything else should work as expected.

The Arduino Sensor Kit is a well designed board for beginners that want to try out a lot of different sensor modules — without the need for wiring. An advantage is that you are free to choice whether you want to go on with the Grove ecosystem or stick with the Arduino ecosystem. Moreover, I have shown that it’s also possible to use the board together with an ESP32. This is helpful if someone wants to go on with wireless applications.

If you want to find out more about the Arduino Sensor Kit, have also a look at the official page.